All about our experiences with Devin... Writings, rantings, and all out putting it out there!

It’s been a while and we’ve had couple of exciting months! Devin was finally approved for waiver services and we’re currently in the process of actually getting for him what he needs rather than what we can afford (he’s already been approved for ABA which is great)… this is a work in progress, but considering we were on a wait list for over 5 years, we’re ok with waiting a little longer

We're just about to embarq on yet another new adventure...it's a blessing but one more scary step we're taking with Devin.

We just got the word that Devin's spot opened up at South Florida Autism Charter School (SFACS for short). We've been on their wait list for almost 2 years.

SFACS is an Autism ABA educational based school. Their curriculum is different than your normal school (even different than the ASD program he's in) - they teach self-help skills, work on communication and behavior skills and will basically be the last school Devin will attend (if God willing all goes well, he will graduate from here).

- For us, the fact that we leave Devin at the front with his aide (rather than taking him to class, staying behind a little longer to make sure “my baby” is ok) will be hard to do… more so for Mima and Pipo! :(.  He will no longer eat the homemade food, but rather what is offered in the cafeteria (you can imagine this is the best part for the Grandma's!)

- For Devin having to get used once more to different people, different classroom setting, different rules - all the makings of a disaster but hopefully with time the eventual adjustment period will set in! (quickly is the hope!!!)

With everything that revolves around Devin, this is another “wait and see” but I’m hopeful that he will thrive further here. Keep us in your prayers for a smooth transition!!

A new chapter to our Devin book

I sit here late at night looking over my little special boy, my forever baby... seeing his chest rise and fall as he deeply sleeps and my mind just swirls...  How did we get so lucky to have such a wonderful little man in our lives but at the same time question how we could be so lucky to have to face all these trials and tribulations? I suppose no one ever asks for this... this is what tests the human spirit... or so they say?!  Don’t they? (and really, who are they that say this? :P)

Today (tonight) we add another page to Devin's little (did I say little? Huge!) book... what we were hoping was a fluke back in December is now a reality for our little Devin and us. We can now consider Devin as being affected by seizures since it's no longer just the one.  Tonight we started him and us on this 2 year long, hopeful path that this second seizure will be the last but filled with doubt and sadness in my heart that it won't be.

I never thought I could find space to worry more for this little person - really, how can I? Surely I can't fit anymore into my brain! But apparently I can / will / do.  It's nerve wracking just thinking about it... I don't want to think about it  {as I stammer and stomp my feet

} but my brain has it there now, front and center and it's NOW one of the hardest things I’m doing.

My God and my prayers are keeping me sane for now... my new work promotion is keeping me too busy to think and ponder “what if” during the day... my need to look back eventually and say "remember when he didn't walk?!..." keeps me going (because he did sit up, he did walk and someday I hope to hear him say "Mom").

Well this new school year started with a bang (for me, more so than for Devin!).  Not sure if it was the whole hoopla of school starting and the hustle and bustle that comes along with it, but the week leading to school was a bit of a letdown for us...

Two weeks into school and I'm going thru some emotions that i thought i was done going thru, but i guess with switching schools and everything that has come with it, I'm at that place again... question myself over and over...

*sigh* I don't know all the answers to this and i guess time will tell... in the mean time i continue to drive myself crazy... and what i say about the let downs don't necessarily stop with just the school related...

But don't get me wrong, even beyond all the worries and all my gripes and complaints, I am still beyond thankful for all in my life for not only do I have a wonderful husband (** i don't know how he puts up with me but second ex-husband is not an option!**) and a daughter that I could not ask more from but as they say "it takes a village to raise a child..." i have my own built in village... from my wonderful mother-in-law Norma who I love so much and I'm so happy she is in our and Devin's life, to my amazing parents who couldn't do more for us if they tried, to my sister and Denis' Aunts and cousins.

Thru the new school year woes, all the new worries that come with it, I have the most amazing people in my life and I thank you all!

Underestimating - A hard habit to break

Within all the issues that Devin deals with daily and within his lack of communication, there is a pretty sharp little guy in there and sometimes I find myself dwelling too much on all the things he can't do and don’t realize I’m missing some of what he can…

Sunday morning my hubby decided he wanted to go to the beach – early, for a little while to avoid crowds – for Devin to get some run time in the sand and a little water activity.

- Important side note: we have a pool that Devin absolutely loves and would live in if we let him! –

After getting his “water gear” (beach shorts, sun proof shirt, towel, beach bag) he realized we’re doing a water activity and without much prompting, Devin cooperated getting dressed, understanding water fun was coming.

Devin, understanding something was missing here, then proceeded to head to the bathroom and climbed the little step stool we keep in there for him and got exactly what he headed there for… you see, Devin had ear tubes and to this day we still cover his ears during water activities with a head / ear band which we usually keep hanging in the bathroom.

Although taken away from the backdoor, the only way to the pool, he understood that we were still doing a water activity (because of the clothing) and knew he needed to get his head / ear band which I had neglected to get.

Sometimes (most times lately) he blows me away and makes me realize there’s more to him than what meets the eye.

A happily cooperating young thing then withstood the long ride to the beach (like a model citizen) and the payoff is seen in this picture… pure unadulterated happiness at its best (oh yeah, head band and all!) 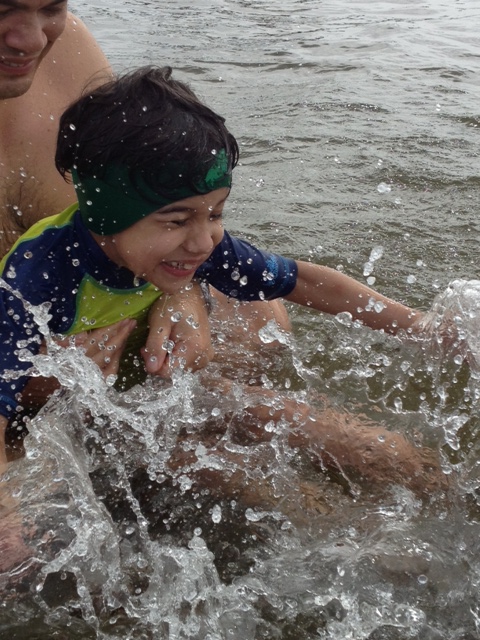